“At Compass Minerals, our Core Purpose is to help keep people safe, feed the world and enrich lives. Beyond the products we produce and manufacture, being engaged in our community is an important part of fulfilling that purpose,” said President and CEO Kevin S. Crutchfield. “We are excited for our company and our employees as we grow our partnership with a first-class organization like Sporting KC, and together advance our shared goal to make a positive impact in the KC region.”

Compass Minerals has been the official plant nutrition and salt provider of Sporting KC since 2018. The company became a First Team partner in 2020 when it became the MLS club’s first-ever sleeve sponsor and gained naming rights to Compass Minerals National Performance Center and Compass Minerals Sporting Fields. Over the past few years, the company’s plant nutrition products have been used to treat both Sporting KC’s home field and training pitch while its deicing products have helped keep fans and players safe during the winter months.

Now, as Sporting’s jersey front partner for the next seven seasons, the company’s logo will be prominently featured on the front of the team’s official jersey. In the club’s history, Compass Minerals will be only the third organization to have a logo on the front of the jersey.

Along with the introduction of the expanded partnership, Compass Minerals also announced a visual identity update with the unveiling of a new company logo. 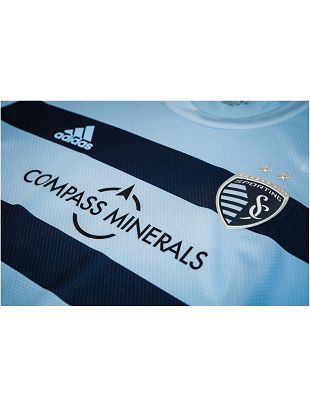